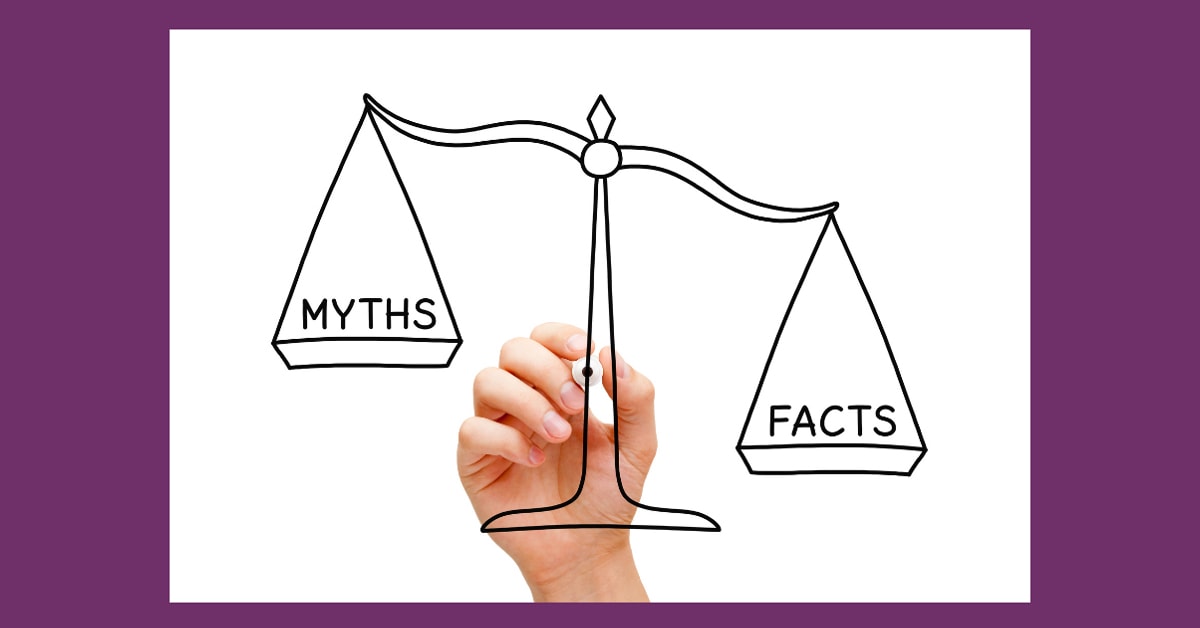 I think it is too easy for lawyers to smirk or eye roll at some of our clients’ beliefs about divorce. At the end of the day, most have never been through the process before, so why should they know the intricacies of it – isn’t that why they come to see us? TV shows, films and the tabloids also don’t help at times, as factual legal summaries rarely make for compelling viewing or punchy headlines!

Over the years, I have noticed that some of my clients have shared similar fears about divorce, so I wanted to take this opportunity to dispel some of the common myths surrounding divorce in Scotland.

1. “I committed adultery so will be penalised financially in the divorce.”

There is a “no fault” principle in Scotland. Which means that a person’s conduct or behaviour will not be taken into account when distributing the matrimonial property, unless it has had a negative impact on their finances.

2. “In a separation, the kids will always end up with Mum.”

There is no law or rule which states the children should live with Mum following a separation. It’s always best if separating parents can try to agree the care arrangements themselves, to minimise the impact of the separation on the children. Many parents can do this really effectively and put in place shared care arrangements which work well. Sometimes this is done after the parents have gone to mediation or engaged the help of responsible family lawyers . Unfortunately that won’t always work or be appropriate for everyone. If parents can’t agree and the court has to decide matters, then a decision will be made with the welfare of the children as the paramount consideration. There is also a duty on the court to take into account the views of the children themselves, wherever possible, when making a decision.

3. “All the assets are in my name so my spouse isn’t entitled to them.”

A common misconception. Generally, ALL assets (and debts) which have built up between the date of marriage and the date of separation are classed as ”matrimonial property” and need to be taken into account – regardless of who’s name they are in. Often people think that because they have kept their savings in a bank account in their own name, their other half won’t have a claim to them but that is not the case (unless they were savings which existed BEFORE the marriage). This also applies to pensions, which again, many people thin don’t need to be looked at.

There are some exceptions to this general rule:

• The family home. If it was bought pre-marriage but the purpose was to be the family home, then it is also classed as matrimonial property – regardless of who’s name it is in. So is any furniture bought for that property.
• Gifts received from third parties.
• Any assets received from inheritance.

4. “We’re not married but I’m a common law wife so entitled to the same as a married couple.”

There is no such thing as a common law wife, or husband in Scotland. Previously there was a type of irregular marriage known as “marriage by cohabitation with habit and repute” but that was abolished in 2006. In Scotland we are lucky as there is some financial protection available for couples who live together (cohabitants) if they separate but it is not automatic and importantly, they are NOT entitled to the same as a married couple.

5. “If I move out of the family home I will lose my rights to that.”

Many people believe that if they leave the family home due to a separation, they will somehow lose their rights to that. That is not the case.

If you jointly own the property but you choose to move out due to your separation, then until the house is sold or transferred, you will remain a joint owner and don’t give up any rights to the property. This means financial rights and rights to live there – unless there is a court order or bail conditions in place preventing you from returning to the property.

If you are married but your spouse owns the property then even though your name isn’t on the title deeds, you still have the right to keep living there (called an Occupancy Right). This means that your spouse cannot change the locks or ask you to leave without a court order or your agreement. If they try to, you should seek legal advice straight away.

Regardless of who owns the property, if you are in an abusive relationship and don’t feel safe in the house, there are steps that can be taken to protect you and your children. If your safety is at risk you should contact the police straight away but there are also civil court orders which can be applied for to prevent your spouse returning to the property – EVEN where they own the property.

6. “We have agreed everything so can get a “quickie divorce” straight away.”

Not exactly. Whilst the tabloids would have you believe it’s that simple, it isn’t.

To apply for a divorce, you first of all need to have grounds. So even if it’s all amicable and you both want the divorce, unless you meet one of the grounds, you can’t apply straight away.

In Scotland, there is no such thing as “irreconcilable differences.” There are TWO grounds for divorce:

1. That the marriage has broken down irretrievably. This can be established in one of four ways:

2. Where either party has been issued with an interim gender recognition certificate under the Gender Recognition Act 2004.

If you do have grounds then the quickest way to have a divorce granted is by using the Simplified Divorce Procedure, often called a “DIY Divorce.” But even then it will normally take 6-8 weeks and that can only be used where there are no children under 16 and no financial matters to resolve.

Otherwise, you need to apply using the Ordinary Procedure which is more involved and will take much longer if matters aren’t already agreed.

7. “If my ex stops paying me child maintenance, I can stop them from seeing the kids.”

Wrong. This is a really emotive topic and whilst this might be tempting, child maintenance and child contact are two separate issues. One cannot and should not be used to influence the other. In a court action relating to the care of children, the court will not take into account whether or not child maintenance is being paid – it is irrelevant. What is important is what is best for the children. It works both ways, so if your ex has stopped you seeing the children, you can’t stop paying child maintenance. This doesn’t just apply to divorce cases but to any separation where there are children involved.

As always, the purpose of this is provide a quick overview of divorce in Scotland. It should not be relied upon as legal advice and specialist advice about your own situation should always be obtained. I offer an initial free consultation so contact me today on 01382 219004 or 07596 322396 or email me amanda@amandawilsonfamilylaw.co.uk.

More information can be found at www.amandawilsonfamilylaw.co.uk.