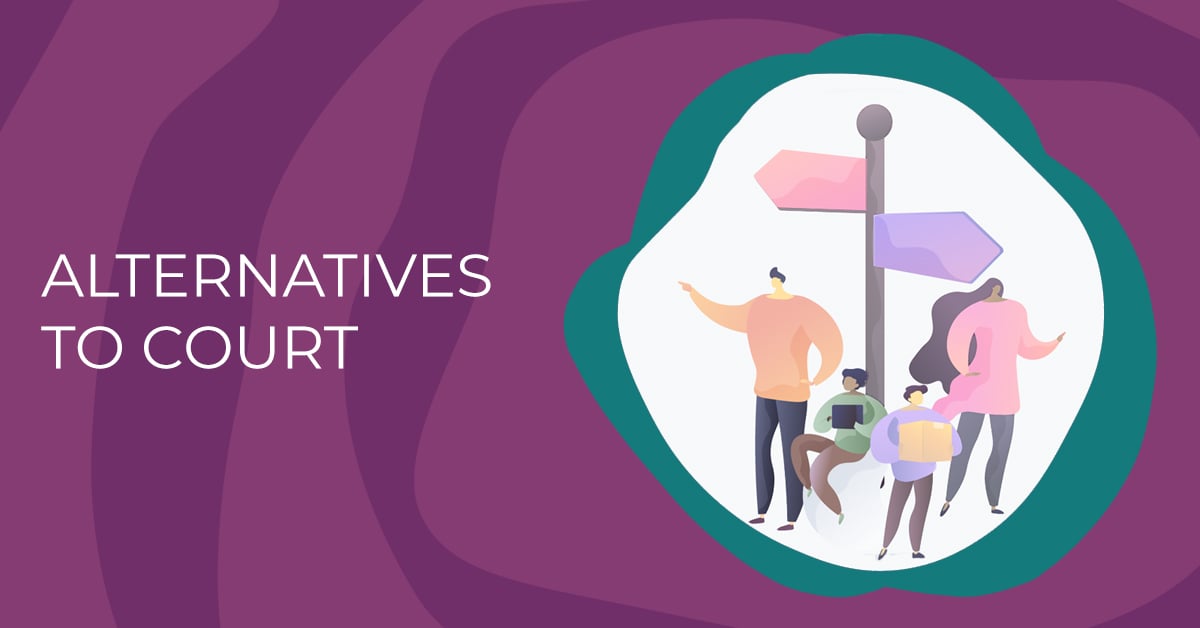 If you are thinking of separating you might worry that you will have to go to court to sort things out. Thankfully however, for the majority of couples, that isn’t the case and court is very much a last resort. There are lots of better options available to help you to resolve matters, often referred to as Alternative Dispute Resolution (ADR). Justice Secretary Dominic Raab has recently stated that he wants to make better use of ADR and in particular, mediation for family matters. He has argued that ADR should be used before thinking of going to court in order to free up court time for cases that need to come before the courts – such cases involving child protection issues and domestic abuse.

In Scotland, a new law has been introduced (The Children (Scotland) Act 2020) which requires Scottish ministers to provide funding to meet the cost of ADR for disputes involving care arrangements for children. The Act also provides for a pilot scheme to be set up, which will mean that any parent who wants a court to make a decision about their child will first have to attend a meeting, which will inform them of the various ADR options available to them to resolve their dispute. The pilot is due to be launched later in the year. The objective is to ensure parents make informed choices as to whether one of the ADR options available might be a better option than going to court.

So, let’s take a look at these alternative options.

Collaborative Law offers a more dignified, flexible, and non-confrontational approach to resolving matters. Rather than negotiations taking place by email/letters being exchanged between solicitors, all negotiations and discussions take place in a series of four-way meetings between the couple and their respective solicitors.

At the first meeting, the parties and solicitors sign a contract called a Participation Agreement, where both agree that they are committed to resolving the dispute collaboratively and will not go to court. This means that everyone involved has an interest in reaching a successful conclusion.

Before each meeting, an agenda is prepared in advance, to set out the items that need to be discussed and agreed upon. Tasks are shared (such as jointly instructing a valuation for the family home) and after the meetings, everyone receives summary of the discussions and the agreed next steps. Once all matters are agreed, a legal separation agreement is prepared and signed.

Amanda is a qualified Collaborative lawyer and can offer this service to clients. More information on the process can be found here.

In mediation you jointly instruct one qualified solicitor-mediator and attend sessions with the mediator together, to discuss the issues which need to be resolved and you will work on an agreeable solution together.

The benefits of mediation are that there can be less negative impact on any children, it is non-confrontational, low cost, flexible and less time consuming than going to court.

A Separation Agreement will still need to be prepared and you would both instruct your own family lawyer who can draft that to reflect what you had agreed in the mediation session and advise you before it is signed.

More information about mediation can be found here.

Arbitration is a legal process which involves obtaining a decision on a family law dispute without going to court.

Each party would instruct their own family lawyer to represent them but instead of going to court, you would agree to refer the matter to Arbitration. The process involves firstly identifying a qualified family law arbitrator and then instructing them to decide matters. In doing so, you both agree to be bound by their decision. The Arbitrator essentially takes on the role of a judge and will listen to each party’s case then make a decision. Rather than going to court, the arbitration process will usually take place at the arbitrator’s office, in a meeting room or it can be conducted remotely. One of the benefits of Arbitration is that it is quicker than going to court and more flexible than the traditional court timetable. As it is typically tailored to a specific issue in dispute (rather than all matters) it can also save on legal fees.

More information can be found here.

To find out if any of these alternatives would be suitable for your own situation contact Amanda for an initial, no-obligation chat – call 01382 219004 or 07596322296 or email amanda@amandawilsonfamilylaw.co.uk